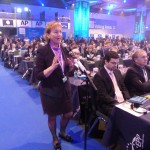 Our action plan contains everything that I, as a politician, wanted to see put into place. For people, for freedom and for peace. However, written words are not enough. They must be carried amongst the people and they must be transformed into actions. We must convince and encourage young engineers, who are amongst the most numerously unemployed, that self-employment and entrepreneurship is a solution to their problems. Our convictions, together with the aid of social media, can help us convince people. We must pay more attention also to the lifelong learning of the older generations and thus enable them to truly use modern media, social networks, the WWW and thus have access to a wide array of information.

I had the opportunity to speak on all these pertinent topics during the EPP elections congress in Dublin. It was encouraging to listen to all the centre-right leaders from the EU and other European countries, to hear the heads of state and government, leaders of opposition parties and individuals from the world of music. Bono from U2, proud of being an Irishman, said in jest that the USA is a colony of Ireland. Throughout history, it was the Irish that migrated the most into the land of opportunities. In addition many former US presidents had Irish roots: Reagan, Kennedy, Bush?

During the Congress, the EPP took on a shared commitment to restore the trust of citizens in politics and create the conditions conducive to the creation of new jobs. ?Let us promise only that which we can achieve? emphasized the German Chancellor Angela Merkel and at the same time pointed out the often forgotten need for personal responsibility. Only by combining common and personal responsibility can we find solutions to the crisis conditions. It is crucial to ensure competitiveness for our citizens, businesses and for individual Member States. This is also an issue that the European Union is currently facing, because if we do not wish to lag behind the USA and China, we need to put on our running shoes.

A true atmosphere of democracy was also present during the elections for the EPP candidate for the President of the European Commission. After a fair race, it was Mr. Junker, the previously longstanding president of the Eurogroup, who emerged victorious. Being in Dublin, it was also a great pleasure to hear the Irish PM Enda Kenny. Ireland has managed to beat the crisis thanks to the international assistance of the Troika and has created more than 60.000 new jobs in 2013. The majority of the heads of government present at the Congress are in control of the crisis situation and have been able to create economic growth in their countries. They are aware of the hardships and sacrifices that their citizens have made and thus spoke of the concrete solution they can offer them. They also spoke of a need for a creative and innovative environment for our economy and entrepreneurs. They spoke on the possibilities offered by mobility on the internal market to our youth, who are the glue of Europe.

Yulia Timoshenko, while bound to a wheelchair, spoke enthusiastically of her commitment to European values and on bringing Ukraine closer to Europe. Having spent two years in jail, her determination to support democratic values is now even stronger. Neither jail nor illness could stop from continuing her political fight for a more democratic Ukraine. We were also shown a film on the political efforts of her daughter, who despite immense strength of character, could not help but cry during her continual struggles to liberate her mother from jail.

We also elected the new president of the EPP, Joseph Daul, who received the vast majority of votes. He temporarily took on the duties of EPP President after the death of Wilfred Martins. Martins was also named the father of the EPP, which has been present on the European political scene for 50 years.

I participated at the Congress as a member of the delegation of the Slovenian Democratic Party, which was led by its president Janez Janša. In his speech, he pointed out the security risks that Europe is currently facing, especially in light of the situation in Ukraine.

Attending the EPP Congress has given me new insights and additional energy that will allow me to focus my political activities even more on finding solutions to our current predicaments. I will seek new solutions for the people by working closely with the people. I will do so because I believe in people.